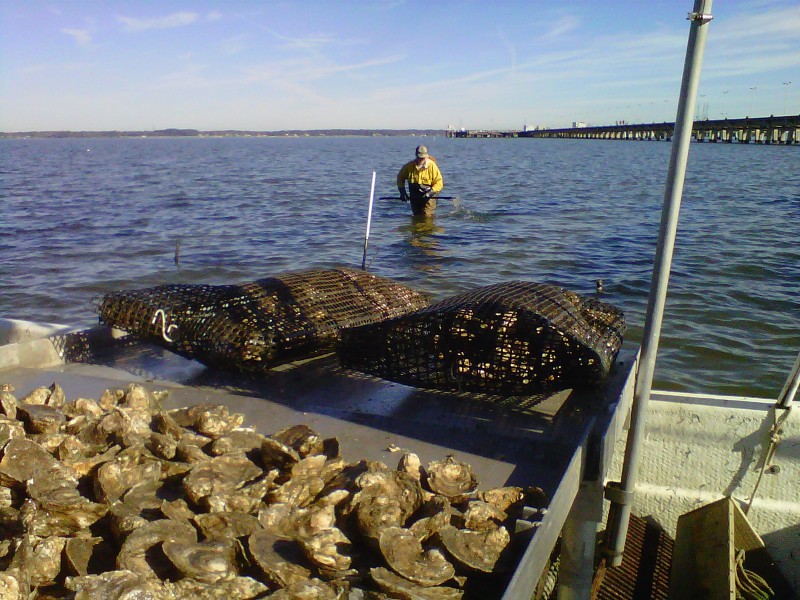 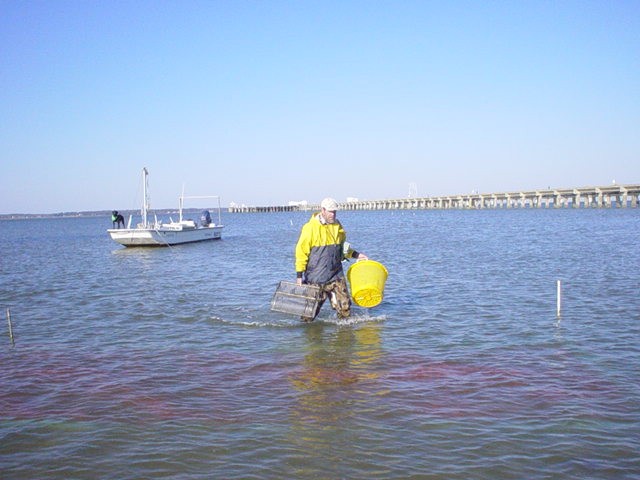 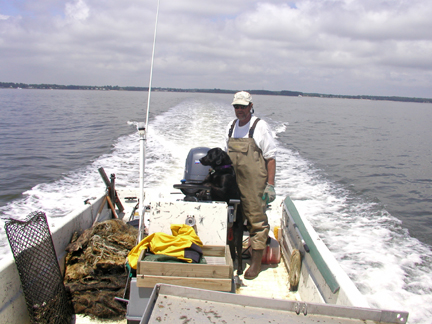 Oysters with a taste of history, grown at the mouth of the salty York River, about 20 miles from the Atlantic, and only a mile or so from Yorktown.

Grown in the clean waters of the York River, a tributary of the lower Chesapeake Bay, near the mouth where salinity is around 20 to 22 parts per thousand or 2 to 2.2% salt. We purchase seed from commercial hatcheries in Virginia when the young oysters are the size of a grain of sand and carefully nurture them to market size in a series of inert polyethylene plastic growing bags and vinyl coated wire cages. This type of farming, or intensive aquaculture, is environmentally friendly, with no need for chemicals, paints or any substances that will pollute the Chesapeake Bay. We use 4 stroke outboard motors on our work boats that use less fuel and create no pollution in the water.

We only harvest to order, i.e., we do not harvest oysters and then find someone to sell them to. For any given days sale, oysters are harvested in the AM, refrigerated and chilled to 45 F before shipment and then delivered in the PM the same day. It takes 2 hours or less (round trip dock to dock) to harvest, depending on the harvest quantity. Our York River Oysters are deep cupped, moderately salty with a sweet buttery finish and have a uniform size and shape. York River Oysters are the perfect mix of salt that satisfies the salt lovers palate while allowing the consumer to actually taste the oyster. If you want to take oysters with you after the tour, I need to know in advance so that I can harvest them for you and have them chilled to 45 degrees. $8/dz or $55/100 count bag. let me know about your order when you schedule a tour. 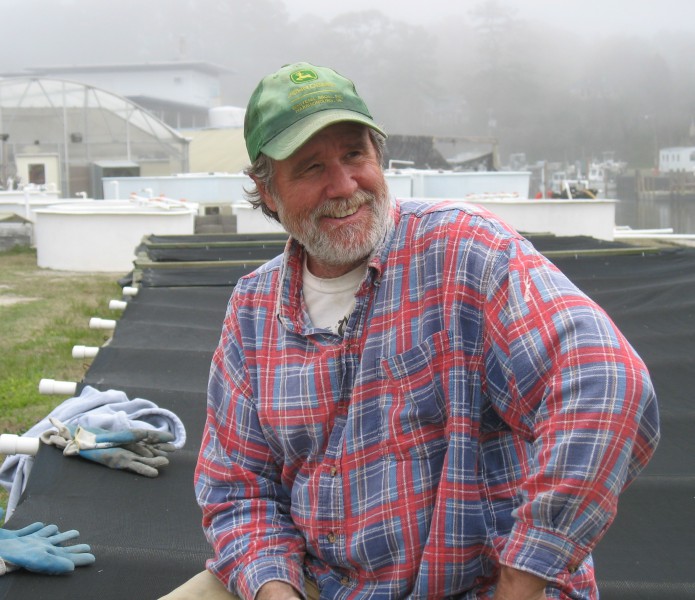 Tours By Appointment. Please give us several days advanced notice. See information on scheduling a private tour below. The Oyster Farm is operational year round and oysters are harvested daily for delivering and shipping.

On the tour you will learn about the Chesapeake Bay, the oyster fishery, oyster farming and the process, and you will get to do a little hands on "light" oyster farming. We will conclude with a short boat ride to my harvest site and sample a few oysters. Please call several days in advance of you desired tour date to schedule a tour.. $50/per adult, $15/child 12 or under. Add $5/adult to pair a locally brewed beer or wine with the oyster samples provided on the farm. Tommy is a US Coast Guard Licensed Captain and has worked the waters of the Chesapeake Bay since 1981. He has lived within a couple blocks of a Virginia Tributary of the Bay his entire life.

The Chesapeake Bay Serpent, Chessie, brings the legendary taste of York River shellfish fresh to the market. Oysters that were demanded by British royalty during colonial days are now provided by Chessie Seafood and Aquafarms. Owner and grower Tommy Leggett works to raise oyster seed in the salty waters of the York River until they reach market size, which gives the oyster a unique and desired taste that locals of the Chesapeake Bay crave.

Where do York River Oysters™ Grow?

Our farm is less than 1/2 mile away from the site of General Lord Cornwallis surrender at Yorktown to General George Washington in 1781 ending the American Revolution. Only 5 miles upstream is the site where Captain John Smith’s life was saved in 1608 by Pocahontas, the daughter of Powhatan, Chief of the powerful Algonquin Confederacy of Native Americans that dominated Virginia prior to the European settlement of North America. Historically, the York River contained oyster reefs that the first colonists to Virginia used as a vital food source.

And I also sell oysters each Saturday at the Toano Open Air Market on the corner of Route 60 and Church Lane in Toano VA, 9-1, Saturdays, March-Dec.

We also ship oysters to individuals via UPS. Oysters are harvested in the AM and shipped in the PM. They are shipped in insulated boxes with frozen gel packs. We generally do not ship via UPS in the summer months unless the customer wants to pay for a next day air shipment or if the shipment can be delivered using next day UPS ground service.

USE THIS SECTION TO DISPLAY COMPANY'S EVENTS